Skip to content
. Meet MatchImpulsa, a transversally feminist programme to foster the digital platformization of SSE and sharing economy in Barcelona
Quick Links 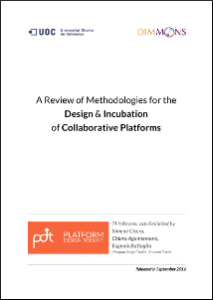 The objective of this report, commissioned to the team behind Platform Design Toolkit,  is to provide a first bird’s eye view on the presence, availability and performance of different design frameworks, as well as incubation strategies and contexts regarding a particular class of ventures -intended as market sustainable businesses: Collaborative Platforms (COPs in the text).

The analysis is essentially focused on incarnations of the platform model (and the collaborative mode of production). This model has been central to the development of recent high growth emerging industries defined within the Sharing Economy, Gig-economy, Collaborative Economy context.

Contents
1. Objective of the Report: definition of the scope of the research
2. Tools for COPs Design
3. Incubating COPs
4. Financing COPs
5. Conclusions

Collaboration, and collaboration supported by digital platforms, does not appear out of the blue. It’s the result of an optimal design, and of development and organizational strategies. In this regard, the question of how to design and support the development of collaborative platform is central for their development. However, the knowledge around such topic still remains largely dispersed and unsystematized. What characterises a positive platform? Which methodologies of its design are available? Which lab and incubating approaches would be more beneficial? To provide a useful resource that systematize the existing materials is the main goal of this dossier.

From the perspective of the ”digital myth” of the unicorn, the vast majority of sharing economy start-ups dream to be valued at over $1 billion. While the aim and motto of platform cooperatives, Commons oriented collaborative economy projects and social and solidarity economy initiatives which “turn digital” is not only economical impact, but also other key aspects: to create community and relationships, to empower distributing value and governance, to have fair labor conditions and transparency, to be environmentally sustainable, to preserve the Internet environment being based on open commons knowledge, contributing to it, among other virtues and emergent needs… But what would be the best design tools and development paths for the latter? Are them using the same tools and strategies that determine success for “unicorn-like” platforms or are there specific ones?

There is a set of conditions which characterise commons oriented digital platforms that need to be taken in consideration when planning and reflecting on their design. First, they usually lack the heavy investment of business angels, in comparison to startups which promise to early “monetize” (using the Silicon Valley language). On the other hand, when they put their social value upfront tend to succeed with crowdfunding, which allows them to deeply engage with communities from the start. Second, it is hard for them to find the experience of skilled and talented designers, programmers and managers, which usually work for the corporate side of the digital economy. Something that usually puts a limit to the usability maturity of commons oriented projects.

In this sense, two important reasons for the success of platforms like Uber or AirBnb are: On the one hand, excellence in design of user experience and sustainability models, usually driven by design thinking (in times when “software has taken command” in words of Lev Manovich). On the other one, the dynamic and strategic incubation of minimum viable features. A couple of examples: Airbnb succeeded thanks to a radical design thinking approach, while engineering teams of the car sharing company BlaBlaCar are devoted to Scrum (the most popular of the agile software development frameworks, which puts the client and the end-user at the center of “incremental features”).

In addition, it has to be considered the ability for sharing economy giants to process and interpret big (closed) data in a context of “hyper-growth”, or their power to hire aggressively top researchers from universities for continuous product development (and how that represents, again, a difficult possibility for many small-scale organisations and cooperative workforces). It also needs to be added to the equation the lack of rigorous academic literature about existing methods and strategies for collective design and incubation in the sharing economy, and specially oriented to cooperatives and other social and solidarity economy actors.

Knowing the different departing conditions of unicorn models and of commons oriented platforms is important and useful, in order to adapt the design and the development of the latter to its own conditions, but also to identify other possible areas of improvement and adoption of design methods, in order to make more elaborate and robust the incubation process of common platforms. There’s promising examples in the direction of improving the set of tools and methodologies for the design and development of open and civic platforms. We can find examples in the “responsive” design of Fairmondo, the solid practices of participatory, incremental platform development behind Loomio, or the care for UX experience like applied in Goteo. Recently in Barcelona Coopdevs, a non-profit association developing open source tools for communities, made an alliance with Holon, a design coop for improving civic software based on design thinking techniques, or Barcelona Activa promotes from the City Council the collaborative incubation of new digital projects for social and solidarity economies from La Comunificadora. That’s the type of combination of tactical knowledges and skills that for example Sasha Costanza-Chock promotes for new projects out of the MIT Collaborative Design Studio. But how to scale those good practices, adding tools and tactics for better design and incubation of co-platforms, is still an early work in progress, that apart from scientific and academic research requires continuous exploration and dissemination of methodologies, as they evolve and are used.

This report provided by Dimmons aims to be a practical and useful resource in this direction of support, to disseminate more rich and optimal tools and methods, as well as incubating strategies for the design and development of commons oriented platforms. From the rich and detailed perspective of the “practitioners”, we have the pleasure to have commissioned it to Simone Cicero, Chiara Agamennone and Eugenio Battaglia, the team behind Platform Design Toolkit, and to have contributed, via fruitful and vivid discussions during its preparation. We wanted to assure a practitioner perspective and a useful resource as a piece of great value for the state of the art on new design and incubation strategies for co-platforms. We hope you find it useful!