The candidates agreed that people’s social, labour and digital rights must be respected

The main candidates for Barcelona’s municipal elections took part in a debate on digital economy policies on 16 May. At the event held at the Col·legi de Periodistes de Catalunya (Catalan Guild of Journalists), they presented their proposals regarding the platform economy and the collaborative economy, which allow users to exchange goods and services via digital platforms. The event was organized by the Digital Commons research group (Dimmons) from the UOC’s Internet Interdisciplinary Institute (IN3), in collaboration with BarCola, a node for collaborative economy and commons-based peer production in Barcelona. The candidates taking part in the debate moderated by Mayo Fuster, leader of the Dimmons group, were Joan Subirats (BCN en Comú), Biel Figueras (JxC), Eva Baró (ERC), Montserrat Ballarín (PSC) and Ricard Vilalta (CUP). All the parties represented in the city council were invited to take part. The event also involved contributions from specialists in the field of the digital economy. 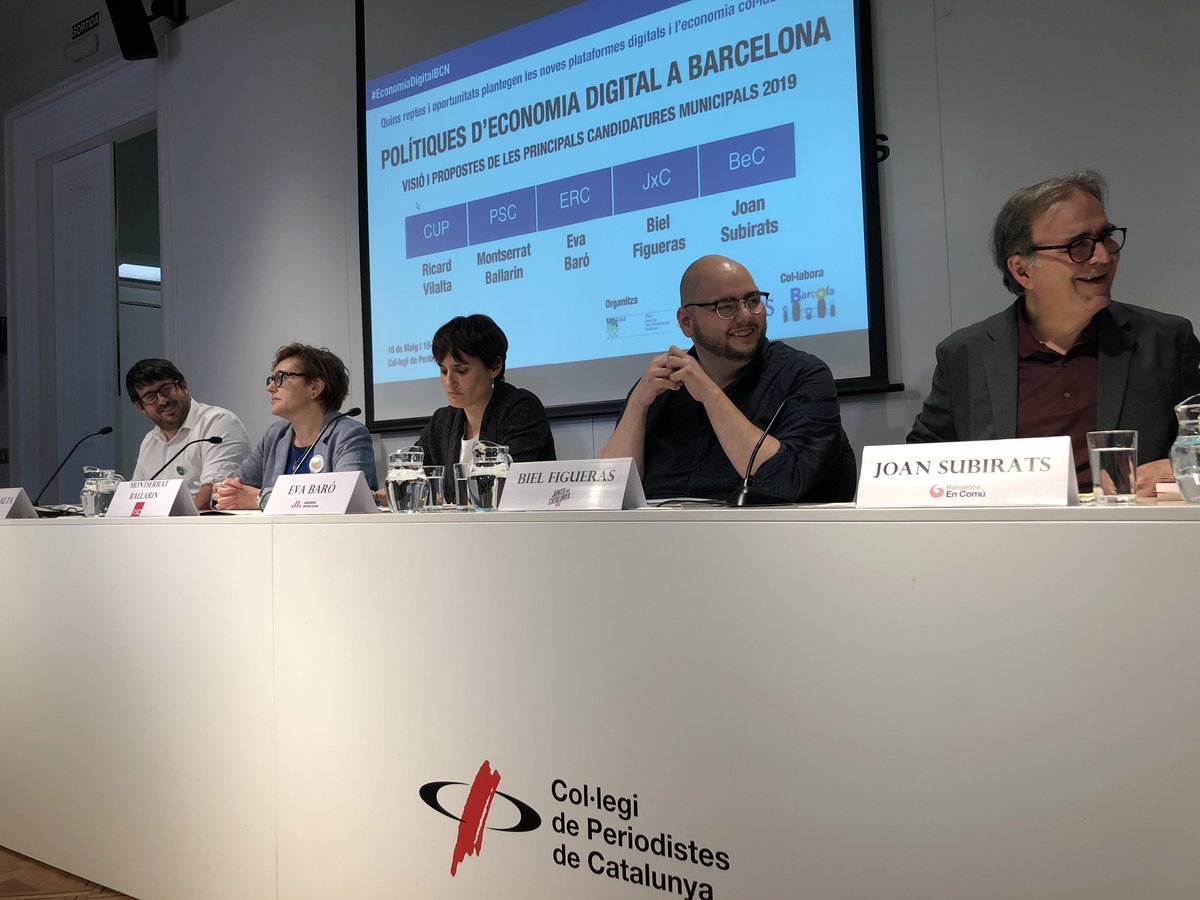 To put the debate into context, Mayo Fuster began by observing that “the platform economy is growing exponentially as an economic model and has an impact on economic activity and the potential to transform cities”. he political participants agreed on the high level of legal limitations in the local area, focusing on municipalities’ need for more leadership. Joan Subirats from Barcelona en Comú said that cities cannot use lack of skills as an excuse, they must act: “Barcelona City Council has been involved with the Sharing Cities summit for the past four years. The municipal potential will take it into areas that affect the lives of citizens and promote alternative models. Biel Figueres, of Junts per Catalunya, expressed reservations regarding the usefulness of creating alliances between cities and suggested increasing the tourist tax. The creation of a body of complementary work inspectors to detect irregularities was proposed by Eva Baró (ERC). Ballarín, of PSC, believes that the digital economy is a source of job opportunities and backed a minimum salary of 1,200 euros and increased labour inspections. Ricard Vilalta, of the CUP, stated that people’s rights need to be prioritized when regulating the platform economy.

How can we deal with the disruptive impacts of digital platforms?

In the second part, Mayo Fuster contextualized the socioeconomic impact that platforms such as Cabify, Uber, Airbnb, HomeExchange, Glovo and Deliveroo are having in Barcelona, as well as the social movements that have been organized in this regard. For example, the strikes called for the relationship between taxis and vehicles for hire. With respect to regulation, all of the candidates present agreed that platform economy companies must respect local laws, understanding the diversity of contexts. The candidate for CUP defended the creation of a strong public sector that guarantees decent working conditions. According to CUP, “the definition of employee is broad enough and only current legislation must be enforced”. Vilalta proposed prohibiting housing for tourist use and initiating a housing emergency plan. Ballarín (PSC) pointed out that certain regulations depend on the European Union and highlighted the value of the alliance in Barcelona between nearly 50 cities who have signed the Sharing Cities declaration. The socialist candidate added the need to create an information point for the public about personal data policies and the creation of a finalist rate for the last mile–the delivery of products purchased on platforms–to boost local trade and reduce the negative impact on the environment. Eva Baró of ERC called for ad-hoc solutions, proposing a shock plan to identify illegal tourist accommodation, reinforcing the team of inspectors and monitors to carry out surveillance regarding regulation and how it is applied to shared homes. Biel Figueres (JxC) suggested increasing the tourist tax and fixing tourist use only for primary residences. Joan Subirats, from BCN en Comú, emphasized the difficult task of regulating the platform economy and explained that strategic sectors are being platformed and “the capacity for regulation is more difficult”. For the candidate, “housing, mobility and distribution are key issues for the city council”, which is why “we have closed 4,900 illegal tourist flats and supported platforms like Fairbnb (a sustainable holiday rental platform), which have a positive impact“.

The last block addressed what public innovations they would like to promote, highlighting the municipal task of improving living conditions in the city. Joan Subirats understands that the institutions must be used as tools for social transformation and mentioned the citizen action platform in the neighbourhoods, Decidim Barcelona, that has been incorporated during this last term. With a long-term view, Biel Figueras proposed an extension of the future T-Mobility, which includes digital economy platforms for public transportation and taxis. Eva Baró claimed that the first step in making a collaborative policy is to transform structures, creating synergies between administrations, “always for the benefit of the citizens”. The ERC proposes establishing a collaborative economy stamp of quality with the Generalitat to identify “the platforms that respect labour rights and data use”. On the other hand, Montserrat Ballarín looked at Barcelona’s talent and how the city council can contribute to its development, “because the Facebook or Google of the future will be created in Barcelona”. Ricard Vilalta added that “it is essential to break down the dynamics of extractive platforms by promoting digital empowerment and technological sovereignty measures”.

Mayo Fuster took the opportunity to invite the candidates to a post-election meeting at the Smart City Expo World Congress 2019, which will be held from November 19 to 21. Researchers, organizations, governments and civil society will participate in the activities of the Sharing Cities Stand Lab 2019 to define the 2020 Action Plan on platform and collaborative economies.

– Declaration of the Procomuns forum on the co-creation of collaborative economy public policies, 2016 http://procomuns.net/ca/politiques/

– Declaration of principles and commitments of cities towards the sharing city, resulting from the Sharing Cities Summit, Barcelona 2018. http://www.share.barcelona/declaration/